The first thing I heard when I woke up this morning was some blustering buffoon on a radio phone-in show complaining about the government "squandering millions" on a variety of "white horses".
It's nice to have a good rueful sneer to start the day with.
So I was waiting at a bus stop on Monday and along came a bus. Who'd have thunk it?
Anyway, what made this event slightly more noteworthy was the fact the LED display denoting the number and destination of this particular bus wasn't working.
The bus pulled up at the stop, the doors opened, and the bus driver shouted out "Number 44!".
He did not sound at peace with the world at all.
Having to shout "Number 44" at the top of his voice at every single stop on the route was undoubtedly taking its toll on him.
To make matters worse, after he shouted "Number 44", the woman in front of me in the queue asked him "Is this a 44?".
I found it very amusing that a few of the people at the stop who got on the bus seemed very, very cagey about the whole business.
It was as if they were deeply uncomfortable about getting on a bus without a number and destination clearly visible.
I sensed they thought it might be some kind of trick.
They had the demeanor of a group of chickens boarding a vehicle who'd just noticed that the driver was a fox.
The tailspin in enthusiasm with which the driver shouted "Number 44" at each successive stop on my journey was keeping me entertained big time.
In fact I'd say it's pretty much the funniest bus journey I'd ever been on.
I used my telepathic skills to get people at the bus stops repeatedly ask the driver that it definitely was a "44".
At one point he shouted "Do you think I would just make this up?"
In hindsight, I would have been tempted to bribe the driver and get him to shout out a completely different number at the next stop.
"Number 31!".
At this point I would jump out of my seat screaming "Oh my god! It's a trap! It's a trap! We're all going to die!", and then pretend to faint.
I'd then try to get a hold of the closed circuit tv footage and create a viral phenomenon on youtube.
Oh well, next time.
After my disastrous gig of 2 weeks ago, I had probably as good a gig as I've ever had anywhere at The Stand on Sunday night.
The most important aspect of it for me was that it was the "main support" slot, but the energy level felt like a 5 minute middle-of-the-bill spot.
It was bizarre to have such contrasting gigs at the same venue in a short period of time.
Posted by jimbo at 12:41 pm No comments: 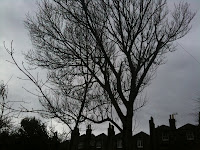 I thought I'd better do another blog.
It's maybe not a good idea to leave a shit review on the first page, even if it was penned by my good self.
I'll have to do another one pretty promptly after this one too as I've now referenced the aforementioned "shit review" twice.
Many people have emailed me asking for an update on the tree situation.
Well, what's happened is that a large branch (itself the size of a medium tree) just fell off the big tree one day.
I'm a bit worried in case the whole tree falls down, and I happen to be working in my garden pruning fruit trees.
it could land right on top of me.
The ramifications of such a tragic event would be unthinkable in the world of Scottish Comedy.
Middle-aged, alcoholic women in West Lothian would likely commit mass suicides in a chilling echo of the Jim Jones sect's demise in Guyana.
Anyway, I'm on the case.
The tree must go.
AND it blocks out the late afternoon sun.
However, this is primarily a health and safety issue, and the fact that the tree blocks out the sun and fucks up my TV reception, is purely incidental.
Posted by jimbo at 12:51 pm No comments:

I hadn't gigged since before Xmas, so was a little edgier than usual before last night's gig.
Unfortunately, my debut gig of 2010 was a far from joyful occasion.
I thought it looked a pretty good crowd initially, but it soon became clear from the compere's opening exchanges that the
stage was ring-fenced by a large group of pissed-up, spray-tanned, over-made-up, gobby, middle-aged women from West Lothian.
Scott Agnew went down very well with them, but my gut feeling was that they were really not my demographic and that this might well be a bit of a struggle.
I started off ok, but it soon became clear that I was a little too "out there" (or "not funny" ; whatever is most applicable for "The Friends of Subo" collective's comedy sensibilities).
They spent the rest of my set talking amongst themselves and periodically heckling.
I didn't really handle it all that well, and not having gigged in almost 6 weeks certainly wasn't helping.
There was another strange man who kept shouting out weird random comments from the back.
I couldn't really see him properly because of the lights, but when I clocked him at the interval, my first thought was "is he going to a fancy dress party as a paedophile, or are these his own clothes?" (he had a big bushy beard as well).
That might have helped my cause if I could have seen him properly during my set.
The problem is that the nature of my set encourages people to shout things out (although 99% of the time they don't).
It was an impossible situation, and the ladies succeeded in making the show about them.
More able comedians would have ripped them apart though.
Anyway, it was 15 minutes of pain, and immediately became one of my top 3 "least enjoyable gigs of all-time".
I could criticise the crowd, and call it a large-scale "Cunts Convention", but the other comedians had decent gigs, so I have to take the blame for not being quick enough on my feet to reverse the catastrophic progress of my performance.
Oh well, at least the "Daily Record" weren't in to review it (I don't think so, anyway).
I am feeling a bit wounded, but am trying to channel my genocidal impulses towards the people of West Lothian by throwing myself into writing with a vengeance.
Posted by jimbo at 9:39 pm 4 comments: