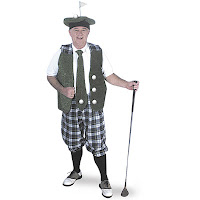 To a certain extent, I have sympathy for Tiger Woods and the predicament he currently finds himself in.
I too am a golfer, and only too aware of the accompanying pressures which participating in this sport bring.
The basic truth of the matter is that for millions of females, the sight of a man carrying a bag of golf clubs, whilst wearing a pringle sweater with brightly-coloured slacks, is the personification of irresistibility.
I've experienced this phenomenum first hand many times, and understand how easy it would be to succumb to temptation and use golf as a convenient vehicle to get off with literally hundreds of women.
In fact, as well as my regulation, full set of clubs in my bag, I also keep a shitty stick, which I use to ward off the hordes of groupies who loiter outside clubhouses waiting for golfers to emerge.
At least Tiger's downfall has brought global attention to the plight of golfers having to cope on a daily basis with this constant hounding.
It is only by choosing to play on rainy days, with a wind chill factor of minus 5C, that I can "enjoy" a game of golf without constant interruption these days.
I'm playing probably the last game of 2009 next Monday. (I thought you might be interested)
Bob, who usually whips my ass (this is a golfing metaphor), has failed to beat me in the last 8 matches.
Next Monday represents his last chance in 2009 to halt the "Jim Park Golfing Juggernaut" (I thought you might be interested).
I could just write about golf all the time really...
Is anyone still reading this?
btw I am on twitter as jimmyparker99
I can give you a hole-by-hole update if you follow me.
So there you go...
Posted by jimbo at 12:13 pm No comments:

My sketch got a pretty decent reaction at "Melting Pot".
It probably would have been better received if anybody in the audience had heard of the Broons comic strip, (very international crowd).
I'd already decided that a Broons parody was all a bit hack anyway. Must try harder.
I was already aware that there's not quite as much money in pro snooker as there used to be.
This was confirmed when I saw that this week's snooker on BBC is the "Pukka Pie UK Snooker Championship".
No disrespect to pies, but I suspect that the sponsorship cash on offer from PP represents a tiny fraction of what the fag companies used to put up before they were banned.
It's a reverse situation from football.
In football the older retired players must curse that they missed out on the big cash £100K a week wages possibilities.
In their day, they had to either become managers or run a pub after they retired ; whereas a lot of today's players don't really need to do anything beyond their playing careers, such are the riches they can now achieve in the game.
However, in snooker, the heyday was the 80s and early 90s when Embassy and Benson & Hedges etc threw millions at the game as it gave them extended prime time terrestial TV advertising.
But now, it's the time of "Pukka Pies" and selling advertising space to local traders on their waistcoats...
I was interested to see the BBC pre-match announcer shout "Let's Get The Boys On The Baize!".
Some of the audience joined in, so I assume this is the new snooker catchphrase.
It's snooker's answer to dart's "Let's Play DARTS!" (genius)
Just been for a haircut...quite a grumpy Australian barber.
This was the opening chat?
Barber : "Were you out last night?"
Me: "Yes, just for a couple of beers"
Barber: "Where were you?"
Me: "Burlington Bertie's"
Barber: "Was there a lot of pussy in?"
Now, I thought that was a bit over-familiar, and I was a bit shocked.
I hesitated, then replied "A reasonable amount", but didn't elaborate.
This seemed to put a dampener on the conversation, and there was silence for the next 5 minutes.
Then he suddenly shouted "You stupid cunt!"
I thought he was talking to me, but he was berating someone outside who had accidentally walked into his barber "A" board on the pavement.
He then moaned about people in Gorgie being "the fucking thickest on the planet, mate..."
Australian people are supposed to be relentlessly cheery.
What has happened?
Posted by jimbo at 4:16 pm No comments:

Amongst the pile of Christmas cards, I spotted a plain envelope addressed to "The Parents or Carers of Jim Park".
That's an unusual first line, I thought.
Has my performance at the "Heresy Comedy Club" last week led to moves for me to be sectioned?
With a degree of trepidation, I opened the letter...even though it was not actually addressed to me personally.
Was I breaking the law?
Anyway, it turns out that it was from the Organ Donor Registry people confirming that "Jim Park" had registered to donate his organs.
I then noticed that the date of birth of "Jim Park" recorded in the document was "14/05/2009".
I was officially only 6 months old, hence the letter being addressed to my "parents or carer".
I can't help feeling that there is something slightly dodgy in a parent registering his infant child for organ donation.
There is obviously a question of consent!
And it's not really the nicest present you can give your 6 month old son.
I could now be under suspicion for having some illegal organ dealing business.
I might already be under surveillance by the social services.
This is the most interesting thing that has happened to me today.
I've got sketch on in "Melting Pot" tonight at The Stand, so will be going along to hear how it goes.
I don't think it's that great, but it's good to force yourself to write.
I saw "Me and Orson Welles" yesterday, and it's the most I have enjoyed a film for yonks.
I still haven't managed to buy new trainers yet.
It's a scandal.
I noticed that this weekend there are a couple of "Tap O'Lauriston Memorial" events.
I used to work and socialise in this much missed Edinburgh Institution, so may go along to pay my respects.
It was an interesting bar, in that one side of it was very much a traditional "old man" type pub, whilst the other side was a trendy, muso, arty bar.
When you worked there, you effectively worked in both bars, as the service area was circular with the trendy and old-fashioned bars on different sides.
It was hard work, and you could hardly see for smoke...but hey, ...good times!
Posted by jimbo at 1:56 pm No comments:

Born to be Mild

So I did my joke about a clipboard facilitating a speedy passage along Princes Street at the Heresy Comedy Club last night.
Nothing.
Not a sausage.
Unprecedented.
That immediately sends a comedy flare up that you should just abandon the script and fool around as much as possible, which
is what I tried to do, with varying degrees of success.
I made some banter with some IT guys about Cobol.
It wasn't very funny.
Who'd have thunk it?
It's a good training exercise.
Mind you, the chuggers on Princes Street seem to have abandoned their trademark clipboards, and are less easily identifiable.
The clipboard has obviously become a loathed symbol of their ilk, and has been replaced by a little badge that you don't notice
until it's too late.
"Excuse me sir!"
Aaarrghh...!
I watched Channel 4 News depressingly document the continuing, seemingly unstoppable, deforestation of the Amazon.
I'd like the whole of Scotland to be covered in trees again just like the good, old days of the "Great Caledonian Forest" (we've only got about 1% of the forest we used to have).
So, couldn't we reforest the whole Highlands, and by doing so get a massive indefinite EEC subsidy for our carbon offsetting, then the population could forever live off the fat of the land, and we'd all live happily ever after.
And by doing so we could help fix the global warming thing.
Just a thought.
I know...but I'm trying to come up with a quick thought every day to keep my brain active.
Right. Xmas Shopping. Go go go.
Posted by jimbo at 12:12 pm 2 comments:

The problem being "between jobs" at this time of year is the shit weather.
Sometimes I think, I might as well be sheltering in someone else's office using their central heating.
If it was June or July, this enforced leisure period would be much more enjoyable.
But dems da breaks.
Jeff O'Boyle was compering Red Raw at The Stand on Monday.
He informed the audience that there would be a "prize draw".
There is always a prize draw, and the existing convention is that on hearing this news, the audience make an excitable
"woooooooooo!" sound.
Interestingly, I was the only person in the club that night who made an excitable (and very loud) "woooooooooo!' sound.
It was very funny.
You had to be there.
I've always thought of myself as having a relaxed, informal Bohemian style when it comes to dress sense and appearance.
This is a look I've assiduously cultivated through the years.
However, my self-image took a bit of a knock on Monday when I was compared to a "tramp" by two separate individuals of my aquaintance.
I assume the remarks were borne primarily out of jealously, as the accusers themselves are highly unlikely to find themselves in the shortlist for "Best Dressed Person 2009".
Nevertheless, I don't want to be complacent, and am going to buy some new clothes this weekend.
I've now gone 7 weeks without a cigarette, and feel good.
My lungs are cock-a-hoop, but my liver is a bit pissed off at the additional workload that has come its way as a consequence of my decision to bid farewell to Mr Nicotine.
I got through the "Beechers Brook" of the no fags regime ok (ie doing a Thurs/Fri/Sat run at The Stand without succumbing to the temptation of the ritual pre and post-gig cigs).
However, this is just a warm up for the "Festive Period" ; very much the Helmand Province tour for the ex-smoking fraternity.
I was trying to get parked near Causewayside in Edinburgh yesterday without much success.
Then suddenly I came across a street with loads and loads of free "pay and display" spaces.
Something didn't seem right.
Anyway, I parked and approached the meter to buy my 30 minutes of parking time (more than enough, but sensibly buying a little extra in case I got delayed).
So anyway, it turns out you have to buy AT LEAST 3 hours of parking time...for £3.
No wonder the street was empty.
Whose idea was that?
I reluctantly paid the £3 then found out that the sports shop that I was told was a good place to buy trainers, doesn't exist any more.
I just want a bog standard pair of trainers, without lights on them, or big padded heels, or stupid colours, that have astro turf studs on them...but apparently this is impossible.
It's an injustice, it is.
Posted by jimbo at 11:03 am No comments: